Hope in the Soil 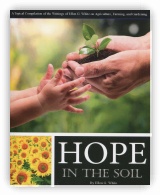 Before edible classrooms began "sprouting" in elementary schools, before buzzwords like "sustainable agriculture", "organic," or "veganic" came into existence, an exceptional woman named Ellen G. White penned numerous counsels to the Seventh-day Adventist Church and its institutions on the importance of farming, an outdoor life, and manual labor.

Though often remembered for other things, Mrs. White was actively engaged in not only farming, but helping those in need to get established on farms. With God's leading, her guiding hand was also deeply involved in the establishment of a model school in Australia—a school that wrapped farming deeply into its highly successful curriculum.
A hundred years have now come and gone since her death, yet the writings of this visionary woman continue, when followed, to bring much blessing to those involved.
Chapter #1 begins with quotes explaining how—and why—nature is one of the most effective ways to reach human minds for God. In fact, it is even called the “key to unlocking God’s Word.” The last part of Chapter #1 explains why farming is the most consistent way to reach souls through nature.
Chapter #2 covers the farm as God’s training school, and how it is one of the most effective ways to reach—and positively impact—the lives of young people. This chapter also includes information on why education close to nature is superior to spiritual growth, and how being out in—and learning about—nature is especially valuable to small children. There is also a section on the farm as a training tool for evangelists (e.g. working hard soil is not unlike dealing with hard human hearts). This chapter ends with some quotes on God’s ownership stake in school farms.
Chapter #3 describes God’s original homesteading plan, starting with the Garden of Eden and going through patriarchal times. The advantages of country living for child rearing are presented, together with some dangers to children from city living, and some advice on saving money and moving to the country. There are also sections on the powerful testimony of a well-kept home and farm, how farmers can be highly effective as missionaries, and God’s economic plan for helping the poor. Ellen White’s example in helping poor families settle on the land, together as a model for godly farmers scattered as “beacons of light,” is also presented.
Chapter #4 details the blessings to be obtained through farming, including character development, unseen advantages, health benefits, spiritual benefits, improved thinking ability, and financial success.
Chapters #5 and #6 detail the characteristics of model schools that follow God’s plan. These quotes were drawn from the experience of Avondale, Madison College, Oakwood College, and other Adventist schools that were set-up with agriculture as a major part of the curriculum. Characteristics of such schools include that nature and the Bible were the primary textbooks, a hand-in-glove integration between education and the agricultural program, a balance between mental and physical labor, a rural or country location, every student learning a practical trade, farming superceding the love of sports and amusements, and teachers rolling up their sleeves and working right alongside the students. Other characteristics of successful model schools presented in detail in this section include self-sufficiency, obedience to God’s plan, and size of the school (small is better). There are also some interesting quotes on why some farms fail.
Chapter #7 urges that there is “No Time to Lose,” offering promises of help and success alongside warnings for the results of a failure to obey.
$22.00
Qty:
Out of Stock

Mandates, Censorship and the Remnant: What Does God Tell Us? $10.00