How Do You Understand Freedom?

John 8: 36 - If the Son therefore shall make you free, ye shall be free indeed.

George Matheson wrote the words to a well known hymn in 1890. It was inspired by the thoughts of captivity and freedom in Psalm 68:18 and Romans 6.

Make me a captive, Lord,
And then I shall be free;
Force me to render up my sword,
And I shall conqu’ror be.

Many people have died in the cause of freedom. We, in the western world, often think of democracy as a synonym for freedom. A common notion of freedom is that of personal liberty where one has a choice, as opposed to slavery, where one has no choice. As personal freedom is further defined it becomes described in terms of statements of rights. However, these personal rights must have boundaries otherwise we have a conflict of rights, which can lead us into conflict with each other. So, there has to be some rule making which limits how far my rights impinge on you. The need for the protection of your rights curtails my freedom to act in any way I might want.

In a democracy, who makes the rules that limit our freedoms and actions? In theory the people in some way make a vote, set up legislation and then have courts of law to enforce the rules. These boundaries on activity prevent us having a conflict of the right to act in ways, which harm others. Where do we the people, get our collective wisdom from to make the rules that enable us to be free within boundaries? From the beliefs, values, past experience, wants and wishes of the majority.

In the western world of democracy the values, which have for centuries shaped much of the legislation, have been greatly influenced by a belief that the Bible’s moral codes (Ten Commandments, do unto others as you would have them do unto you, etc.) which proscribes our behaviour. The Bible has been accepted as an immutable guide - unchanging and unchangeable over time - because of it’s basic inherent, and for Christians, inspired wisdom. However, we now live in a world where the barrage of evolutionary and agnostic propaganda has shattered confidence in the Bible and it’s moral codes. In so doing, society’s values have also been shattered. Without the God given moral boundaries as found in the Bible, our societal thinking is like a rudderless ship driven by the changeable winds of group feelings and wants.

The current push for same-sex marriage is just one example. The claim is for equality and the freedom to defy God’s natural law for sexuality and marriage. Marriage and family has up until now, been the cornerstone for social stability and security for children as they grow into adulthood.

The call for the freedom for the right to same-sex marriage tramples on the right of children to have close and lasting relationships with both biological parents. It appears that the rights of the children are being trampled on, as the Biblical barriers for protection of children, enshrined in the moral codes of the Bible, are dismantled. The so called right for marriage equality is an attempt by Satan to deface God’s natural law of sexuality and marriage established at creation. The second institution that God established at creation was the seventh-day Sabbath. How long will it be before Satan attempts to totally dismantle the Sabbath?

The Bible makes another definition of freedom to the one that is being given popular voice in so many places today. It teaches that we have a choice about who we serve. In that choice and within the boundaries of the choice we make, we either choose to be set free from sin and live as God’s servants or be slaves to Satan and to live in bondage to him. Jesus said - And ye shall know the truth, and the truth shall make you free. ….. If the Son therefore shall make you free, ye shall be free indeed. (John 8: 32, 36).

Also, consider Romans 6: 18, 20, 22. - Being then made free from sin, you became the servants of righteousness. …… For when you were the servants of sin, you were free from righteousness. Here Paul describes the paradox of the concept of Biblical freedom. Freedom within a fence for our protection from evil and evils associated hurt to us. Moral freedom is never unbridled choice. It is a choice between the fenced paddock of morality or the gaol of immorality and the eventual consequences of either.

It’s a different concept to the popular definitions of freedom and rights that Satan has made so prevalent in our world – unbridled, unrestrained freedom – if it’s what I want I have the right to do it, regardless! But the Bible contradicts this notion of freedom. …. But now being made free from sin, and become servants to God, you have your fruit unto holiness, and the end everlasting life.

There are always consequences for going against the boundaries God has set in place for our protection – whether we recognise God as Creator and Redeemer or not. In the natural-physical world these boundaries also exist. If we jump off a cliff we will always come crashing down. If we go against the natural-spiritual law God has given us, we will come crashing down as well. The laws are there and our compliance with them offers us protection. We are free to ignore them, but at our peril. God does not force our choices. In this sense we have freedom to choose and gain eternal life or freedom to choose and lose eternal life. The consequence is a result of the choice.

This is the 125th anniversary of the publication in 1892 of Ellen White’s classic book originally named Steps to Christ, but republished under various titles, including Path to Peace, Happiness Digest and Road to Redemption. In it Ellen White spells out the steps we can take to be set free from the snare of Satan. She says God desires to heal us, to set us free. But since this requires an entire transformation, a renewing of our whole nature, we must yield ourselves wholly to Him. (Chapter entitled Consecration).

She observes that true freedom comes with a renewing of our whole nature. How do we have our nature or disposition to think and do the wrong things renewed? Steps to Christ, in simple clear and

compelling language, spells out how with God’s help we can do this. If you haven’t read it at all, or haven’t read it recently, now’s a good time to do so. A chapter a week from now will acquaint/re-acquaint you with the steps for a renewed nature before the end of 2017.

Dr Coralia Jigau: What Can We Do to Minimize Our Risk of Getting Breast Cancer?

The risk of Australian women being diagnosed with breast cancer before the age of eighty-five is one in eight. Of men, 150 are diagnosed with breast cancer every year. So how can we minimise that risk? Dr Jigau presented recent research findings on this important topic in the STL studio recently. We filmed her presentation. Its now available on DVD.

Mark This Event in Your Diary Now. Janet Neumann and Diamond Garcia – Being a Seventh-day Adventist Christian in a Contemporary World. Melbourne: November 3, to 5. Sydney: November 10 to 12. Brisbane: November 17, 18.

With all the distracting turmoil and temptation of the post-modern world surrounding us today how can we live as victorious Christians? Janet is a grandmother. Diamond is young enough to be her grandson. Together they have accepted our invitation and have teamed up to share their insights on this important topic.

For details of where, when and what their topics are please see the included brochure or click the link supplied. 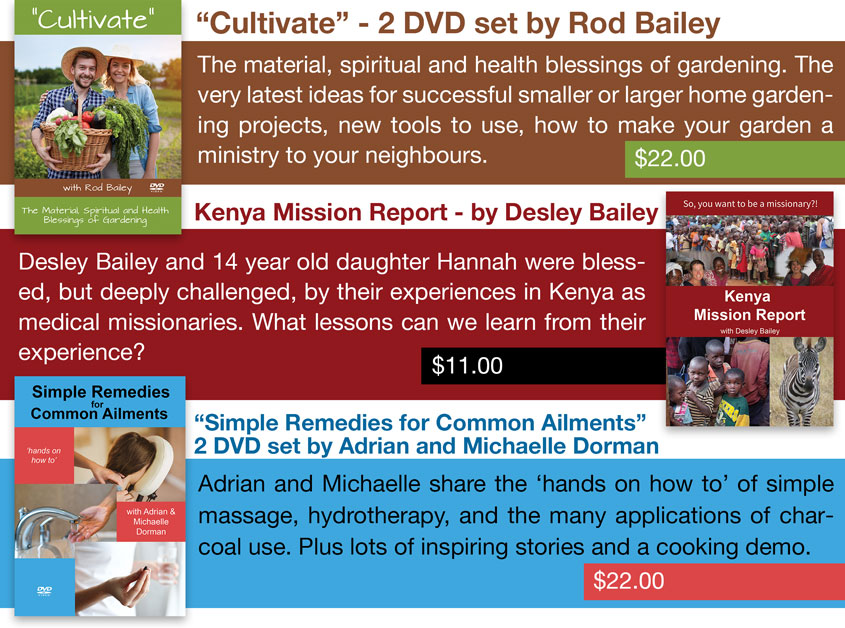