The Dragon Revealed Down Under - MP3 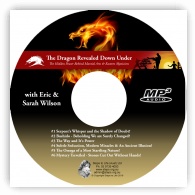 Larger Image
From a broken teen to 7th level Black Belt...
Eric began training in the martial arts at the age of fourteen, just after his parent’s separation.  Searching for stability and meaning in his life, he began his journey on a path which promised confidence, assurance, and control.  Over the next 24 years, Eric received black belt and instructor certification in seven styles of the combative arts.  He was inducted into the Martial Arts Hall of Fame in the USA. With a background in natural and alternative medicine, Eric studied extensively in the field of energy healing. He was recognized as an instructor in the Chinese internal arts of Tai-chi, Chuan, Bagua Zhang, Qigong and Traditional Chinese Medicine.
The life he lived was to all appearances a success.  But through the years involved in the eastern mystical arts, Eric had become blind to the forces which had set themselves to destroy both himself, Sarah, and their family.  Their marriage crumbled.
However, after nearly five years of separation and divorce, God reunited Eric and Sarah in the covenant of marriage, restoring both their family and their home.
Eric shares the miracle of how God rescued him from the powers of darkness. Eric and Sarah’s lives are now dedicated to sharing the glad tidings of salvation in Jesus, and His desire to set every captive free!
Eric’s Australian seminar series for Steps to Life has been specially prepared for his visit to Australia.  It contains updated and additional information to his five part series filmed by Amazing Discoveries TV (Canada) and Little Light Studios (USA).
1. Serpent's Whisper and the Shadow of Doubt?
2. Bushido - Beholding We are Surely Changed?
3. The Way and It's Power
4. Subtle Seduction, Modern Miracles & An Ancient Illusion?
5. The Omega of a Most Startling Nature?
6. Mystery Unveiled - Stones Cut Out Without Hands!
Purchase Options
$8.80 Physical Product (1 MP3)
$8.80 Digital Download (6 MP3 files)

God’s Remnant Church Divided (Temporarily): What Does the Futu $2.60
More >