Owing to Covid19 please be aware of delays in receiving your orders.  We have been notified by Australia Post that there is a delay of 4-6 weeks for all shipments for incoming and outgoing shipments from Canada and USA which reflects on all orders as we receive most of our stock from these countries.

Owing to Covid19 please be aware of delays in receiving your orders. We have been notified by Australia Post that there is a delay of 4-6 weeks
for all shipments for incoming and outgoing shipments from Canada and USA which reflects on all orders as we receive most of our stock from these countries. 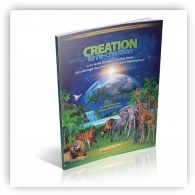 Larger Image
Nicolene Filmalter published her first full-colour, illustrated and comprehensive book on Creation Science entitled ‘Creation by God, or evolution... from nothing?’ in 2014 for ages 12-112. In addition, she compiled a DVD-series based on this book which is currently being broadcast on Amazing Discoveries TV. In this new book, Nicolene’s focus is mainly on elementary school children. The amazing story of Creation, Destruction and Redemption is illustrated in a colorful manner, while the children are introduced to various scientific terms and principles. Nicolene is a part-time lecturer in Applied Natural Sciences (Nature Conservation) at UNISA (University of South Africa) and published her Master’s Degree in Plant Ecology and Management of the Hondekraal section of the Loskopdam Nature Reserve in 2010. She is involved in research in the ‘Applied Ecosystems Research Unit’ (ABEERU) from UNISA and also acts as an external examiner for master’s degree students.
“Why a new book for children on the evolution creation debate by Nicolene Filmalter when her previous book, ‘Creation by God or evolution from nothing?’ already contains so much valuable information? Young minds are influenced in their formative years by the prevailing philosophies of the day and the evolutionary paradigm is implanted in these minds by every conceivable means, particularly by the media and the education systems of the world. A distrust in the veracity of God’s Word is nurtured from an early age and the character of God is misrepresented and for these reasons, it is imperative that the record be set straight. This timely book is not only well written, but will provide precisely the antidote needed to face this challenge. It is a privilege to recommend it.”—PROF. WALTER VEITH – Author and retired Professor of Medical Bioscience and former head of the Department of Zoology of UWC
“It is rare to find a book written for youngsters in which the parents can also learn something new on almost every page. ‘Creation to re-creation’ is such a work, answering common questions on Creation, the Fall, the Flood and redemption in simple terms that children can easily understand. My sons Jovàn (10) and Elian (8) were riveted by the book and I have heard them use arguments from it when discussing dinosaurs with their friends. The book also addresses the fallacy of evolution while remaining true to scientific principle and shows that Genesis 1-11 is not myth, as many Theologians claim it to be, but can reasonably be accounted for when studying nature; cosmic, geographic, human and divine. It is biblically sound and creatively interweaves the physical and the spiritual to create a beautiful tapestry of a loving God. It is often said: ‘Don’t judge a book by its cover’. Never has it been truer than in this case. ‘Creation to re-creation’ has cover-to-cover fascinating facts, builds your faith and punches way beyond its weight!”—EBEN DE JAGER - Evangelist, Public Speaker, Pastor
$22.00
Qty:
Add To Cart >