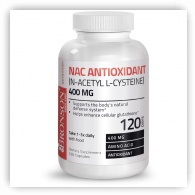 Larger Image
N-Acetyl L-Cysteine (NAC) is a powerful antioxidant that supports the immune system.
N-Acetyl L-Cysteine (NAC) is a form of amino acid L-Cysteine, which is the most abundant source of sulfur in the body. NAC is metabolized by the liver and is used to break down excessive mucus in the nose, throat, and lungs. NAC is also a natural anti-inflammatory agent that reduces nasal swelling, making it a smart choice to help you breathe easier during allergy season or while dealing with the common cold.*
A precursor to antioxidant glutathione (which is known as the “mother of all antioxidants” due to its powerful detoxification and immune support abilities), NAC can be found in cruciferous vegetables like Brussels sprouts and broccoli.
Bronson Laboratories N-Acetyl L-Cysteine contains 400 mg of NAC per serving to support your healthy lifestyle needs.
$28.00
Qty:
Add To Cart >