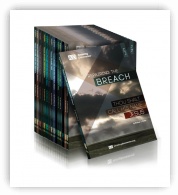 The series provides an update on Total Onslaught, Walter Veith’s previous 36-DVD set. This new 15-DVD series includes an in-depth study on the king of the north found in Daniel 11, and discusses Biblical prophecies and their modern applications. Veith unveils the king of the north as the head of a global, religio-political system that encompasses all religions. Also revealed will be the true identity of the king of the south. Is it Islam, as many claim? Is Allah the same as our God, as many proclaim him to be? Learn the similarities between Catholicism and the Qur’an, and be informed about the unifying measures that many world religions are participating in that diminish the truth about Jesus. Most importantly, be confirmed in the truth God has given His remnant and prepare for the soon coming of Jesus Christ.