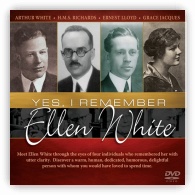 Larger Image
Filmed in the 1970s, Yes, I Remember Ellen White gives a human-interest glimpse of the life of Ellen White by four individuals who knew her personally.
The DVD includes conversations between two of Ellen White’s grandchildren, Arthur White and Grace Jacques. The two share stories while walking together at Elmshaven, Mrs. White’s last home. And who wouldn’t be captivated by the recollections of H.M.S. Richards Sr., filmed in his study as he talks in that easy, conversational manner that marked him as one of the most prominent radio evangelists in America? And don’t forget the memories of Ernest Lloyd, the longtime editor of Our Little Friend.
$33.00
Qty:
Add To Cart >

God’s Remnant Church Divided (Temporarily): What Does the Futu $2.60