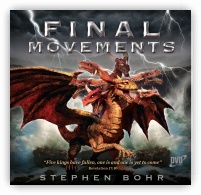 Pastor Bohr gives us a view of last day events happening both inside and outside of the church that are tending toward a crisis that we must be prepared for. "We have far more to fear from within than from without" (1SM 122) we are warned. Satan is trying to sneak into the remnant church through unconsecrated members and this series unveils some of the ways he is trying to do this.

Satan hates God's last day truths revealed through the remnant church and Revelation 12:17 says he will focus his attack primarily on destroying the influence of the commandments of God and the testimony/prophetic voice of Jesus in the church and thus keep the world in darkness.  But Revelation reveals how he is also working through political and religious powers, symbolized by various beasts, toward a religiously deceptive unity that is not based on truth, but appears to be Christian on the outside to fool people as to its real agenda.

As the United States is influenced by religious leaders, some who may not even realize where their agendas and dreams are heading, and starts to muddy the waters that separate church and state in order to gain the popular vote, we are seeing the seeds of a revival of the power during the Middle Ages that became intolerant of other ways of belief.Pastor Bohr shares some fascinating history, including many recent troubling examples of this trend that is fulfilling prophecy and that will finally culminate in the collapse of all the walls set up by our Constitution and by the Reformation to protect religious freedom.

In the end, the world will be controlled by the mysterious woman of Revelation 17, who rides a mythical river dragon and drinks from a golden cup filled with abominations. This is where this series really sets itself apart, as Pastor Bohr shares the archaeological background and ancient lore behind the apocalyptic seven-headed dragon and gives an unusual and very plausible interpretation to the puzzling verse: "Five kings have fallen, one is and one is yet to come" (Rev.17:10).

Mandates, Censorship and the Remnant: What Does God Tell Us? $10.00
More >