Megiddo I: The March to Armageddon 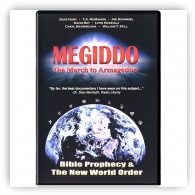 Larger Image
Megiddo: The March to Armageddon explores Bible prophecy concerning the last day empire prophesied in the Old and New Testaments. Built upon decades of investigation and strong Biblical teachings of leading researchers, this documentary unfolds:
- The way God uses prophecy to prove His existence
- False prophecy according to the Bible
- The specific nature of God's true prophecies in the books of Daniel and Revelation
- Elements of prophecy today that set our time apart from centuries past
- The importance of Israel as "God's Timepiece"
- The recorded history of the New World Order through:
- The conception of a satanic conspiracy in Bavaria, involving secret societies
- The hidden agenda of these societies to destroy the Gospel and overthrow all established authority
- The French Revolution, Jacobin Clubs & origin of "depopulation" programs
- Jacobin movement in America during the days of the founding fathers
- Thomas Jefferson and his contempt for the Gospel of Karl Marx, Satanism & the Russian Revolution
- The 130-year old plan for "Three World Wars" and the Battle of Armageddon
- The satanic conspiracy of nations, kings and rulers "against the Lord and against His Christ" according to
Psalm 2:1-2, Revelation 17:14 and 19:19
- Quotes from powerful men of history who have spoken of the need for world government and a New World Order
- State-of-the-art 3D animation graphics that provide visual aid for:
Nebuchadnezzar's dream of an image representing four world empires
- The fourth beast of Daniel's prophecy
- The seven headed beast of Revelation 13
- Mystery Babylon the Great o Antichrist
- The False Prophet
These graphics were specifically designed with pastors and teachers in mind, who desire visual support for their teachings on these subjects.
REVIEWS
"By far, the best documentary I have seen on this subject"
-- Dr. Stan Monteith, Radio Liberty
"Great! Very in depth and informative. I pray that it shakes the church and the nonbelievers alike."
-- L.A. Marzulli, Author of Nephilim & The Unholy Deception
"The most thorough documentary I've ever seen on the New World Order."
-- David Wegener, Hope For America Ministries
"Couldn't believe how INCREDIBLY great it was. SO documented, so concise, so factual, so much scriptures,
just SO good!"
-- Michael Lewis, Honolulu, HI
"This is the first documentary that I know of, that has united experts from the two worlds of biblical prophecy and the New World Order."
-- James Ainsworth, Fall River, MA
"I have been researching on my own, the issue of eschatology and the New World Order. I've seen many documentaries, and read a few books, but NEVER have I ever been so informed both in biblical and non-biblical sense about the history of the plans for the new world order. I have both part 1 and 2 but have not yet watched part 2 because part 1 has SO MUCH info in it that you have to either rewind some things, or just wait it out and let your mind absorb all the info that it provides on this issue. If you're like me and you like me, and this end times/ new world order tickles your nerve, get this video."
-- Jay
"Incredible!!! It's so informative and thorough. I've seen Megiddo three times. I learn something new every time I see it. The best end-times documentary yet.
-- Leanne Griffin, Sherman Oaks, CA
"Well researched and produced project. This DVD will not disappoint anyone seeking
over two hours of well researched information on the coming world order/economy.
-- John Doerr, Crystal Lake, Illinois
"It is by far the most well made film of this kind I ever saw. It was EXCELLENT!!!"
-- Marlene DiResto, Massapequa Park, NY
"An accurate Biblical and historical account of prophetic events. Put together very well, especially Daniel's prophecy."
-- Kelley Locke, Simi Valley, CA
"It is one of the most fascinating documentaries I have ever seen, largely due to information and history that has been withheld from the public at large."
-- James Ainsworth, Fall River, MA
"Excellent. Very comprehensive. The best we have seen."
-- Rita Williams, Cephas Ministry
"Very well done. Very powerful, cohesive and to the point."
-- Nicole Reagan, Van Nuys, CA
"Substantial and fast paced. Your presentation graphics were fabulous."
-- Jim Messenger, Balzers, Lichtenstein
"It is the best presentation I have seen to date."
-- Charles Riley, Atlanta, TX
$37.40
Qty:
Add To Cart >

Mandates, Censorship and the Remnant: What Does God Tell Us? $10.00
More >