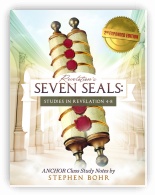 Larger Image
Revelation’s seven seals (Revelation 6:1-8:1) have long been a topic of animated discussion among Adventists, Protestants and the world in general. The Sabbath School quarterly recently dedicated three lessons to this topic. Obviously, it is impossible to comprehend fully the meaning of the seals in just three short lessons so we will dedicate an entire week to their study.
What do the seven seals mean? Must we understand then literally or symbolically? What principles must we apply to them in order to understand their true meaning?
In this ANCHOR class study, we dedicate an entire week to decode the meaning of the seals verse by verse by applying historicist principles. Not only will we study the seven seals, per se, but also the magnificent introductory vision in chapters four and five as well as the prophetic interlude of Revelation 7. We will answer questions such as the following (and many more!):
$121.00
Qty:
Add To Cart >