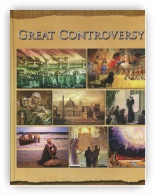 An excellent gift.  This beautiful Illustrated Great Controversy is a complete text, plus Basic Steps to Christ, color pictures, charts, and maps throughout, indexes,-plus much more.

Volume 5 of the Conflict of the Ages series carries the story of the controversy between God and Satan to its ultimate and glorious conclusion. Beginning with the destruction of Jerusalem and continuing through the persecutions of Christians in the Roman Empire, the apostasy of the Dark Ages, the shining light of the Reformation, and the worldwide religious awakening of the nineteenth century, this volume traces the conflict into the future, to the Second Coming of Jesus and the glories of the earth made new. As the end draws ever closer, the vital issue of loyalty to God will become decisive. In this concluding volume, the author powerfully points out the principles involved in the impending conflict and how each person can stand firmly for God and His truth.