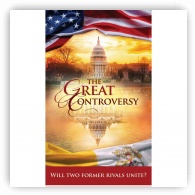 This new printing of The Great Controversy has a completely redesigned cover that points to current events in the news and soon coming changes that will impact the entire world. This book still has the same 42 chapters and appendix that E. G. White wrote, edited, and approved. This printing also retains the larger print, wider margins and whiter paper for easier readability.

When John F. Kennedy ran for president, many Americans opposed electing a Roman Catholic to the White House. They feared that the Catholic Church might dominate the state, robbing Americans of their cherished freddom of conscience.

That was before President Ronald Reagan and Pope John Paul II worked together to bring down Communism during the Cold War. That was before Pope Francis spoke to Congress and waved to adoring crowds in Washington. D.C. Now many Americans view the pope as a respected leader of the Christian world.

Is this a good or bad thing? Before we decide, we should take a hard look at history, because the only thing we have to fear for the future is if we forget the past.

This book, first published in the 1880’s brilliantly predicted the thawing of tensions between the United States and the Vatican. The author reaches some very important conclusions about what that new friendship means the future.

The Great Controversy poses a serious question that every individual must consider. If a political superpower and a religious superpower join forces, what will be the inevitable result?